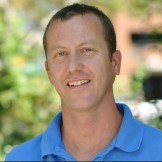 Safe infrastructure: it’s in the details

Whether I’m riding a bicycle or driving a car, I pride myself on being as aware of my surroundings as possible. With this in mind, I was alarmed, recently, when I came very close to being hit by a car as I crossed an intersection.

The photo below is from an intersection much like the one where I was nearly hit. Typical of intersections in the U.S., it is designed to move motor vehicles through as fast as possible, making it less safe than it could be for those who are not in a motor vehicle. As you can see in the photo, the stop line is far away from the cross street, and the curve of the roadway (in the foreground) is designed for a high-speed turn, which means that when a person in a car comes to a red light and wants to make a right turn s/he typically:

If the person in the car does not look back and forth, s/he misses any people who may be crossing.

Additionally, it is impossible for a person in a vehicle to see if there is room to make a right turn until the vehicle is blocking the crosswalk.

What happened to me

I was out on a simple grocery run, a ride I take frequently. I was traveling on the bike path and came to a stop at an intersection before entering a crosswalk.

On the cross street, there were cars stopped in both lanes, waiting at a red light. I sensed the car in the lane closest to me was going to make a right turn on red, and I could tell that the person in the car was not paying attention to me, so I waited until the person saw me and stopped their car.

Then I started to cross the street. As soon as I passed the car that was turning right, I heard the sound of screeching brakes.

While I was waiting for the right-turning driver to see me, the traffic light had changed without me realizing it, and I hadn’t double-checked the signal before I began to cross.

The person in the vehicle that almost hit me had stepped on the gas as soon as the light changed to green, not expecting me to be there. I feel fortunate that I was not hit.

Why I’m sharing this story

I want to remind everyone, however you get around, to stay vigilant. And I want to share this as an example of typical infrastructure that could be so much safer for bicyclists and pedestrians. We must do better to balance the safety needs of all road users, not just those in motor vehicles.

About the Author: Justin Millar

Justin handles all our bookkeeping including accounts payable and receivable, helps manage the online store and provides event support. His diverse background provides expertise any number of ways in the office. Justin enjoys riding around Boulder with his young son in tow.